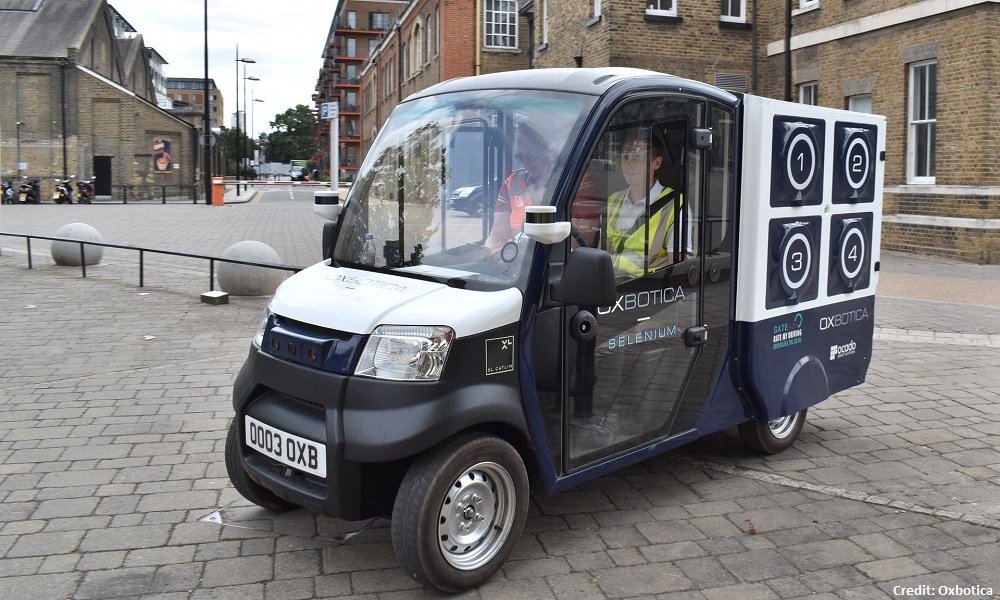 By Ryan Daws | 29th June 2017 | TechForge Media
Editor at TechForge Media. Often sighted at global tech conferences with a coffee in one hand and laptop in the other. If it's geeky, I'm probably into it.

Ocado has demonstrated its vision for driverless grocery deliveries with a prototype van powered by Oxbotica’s driverless technology.

The vehicle spent two weeks on a two-mile circuit in a semi-pedestrianised area of Greenwich, south-east London to demonstrate the kind of environment Ocado believes its driverless vehicles will operate in once deployed.

CargoPod is an electric vehicle which helps to reduce its environmental impact. The vehicle’s top speed of 25 MPH makes it suitable for urban environments but not for areas which require the use of dual carriageways or motorways. On a single charge, the CargoPod can do 18 miles. These attributes make the CargoPod useful for local deliveries but not for long-distance haulage.

The vehicle is small to improve mobility and drive to areas which are off-limits to larger vehicles. The current prototype is able to carry eight crates which are suitable for small-to-medium sized orders, but not for a full weekly household shop.

CargoPod is part of a £8m research project based in Greenwich we’ve previously reported on which is run by the DRIVEN consortium – led by Oxbotica.

Several other leading companies are investigating the potential for autonomous deliveries. Amazon is famously testing small drones which can deliver packages within 20 minutes. "Drone technology is very interesting to us, and we use it quite a lot in our business for surveying and looking around our large premises," said Aidan Bocci, chief executive of Commercial Advantage, speaking to the BBC. "But do I think 35kg of groceries are going to be flying over your head anytime soon? No, I don't."

Logistics giant Hermes has also been testing automated technology in the form of small machines which drive at low speed on the pavement. Just Eat have been using them for takeaway deliveries in parts of London, while Hermes has been testing them for collections. The vehicles are created by Starship Technologies’, have a top speed of 4mph, are 55cm tall and 70cm long, and weigh 18kg. They can carry up to 10kg at a time with packages stored inside a secure compartment that can be unlocked with a code sent to the customer’s phone.

Experts predict land-based automated vehicles will be the first to deploy and the most viable option for most deliveries in the foreseeable future due to their ability to carry more, at heavier weights, and not be subject to as many strict regulations as airborne machines.

Are you looking forward to automated deliveries? Share your thoughts in the comments.