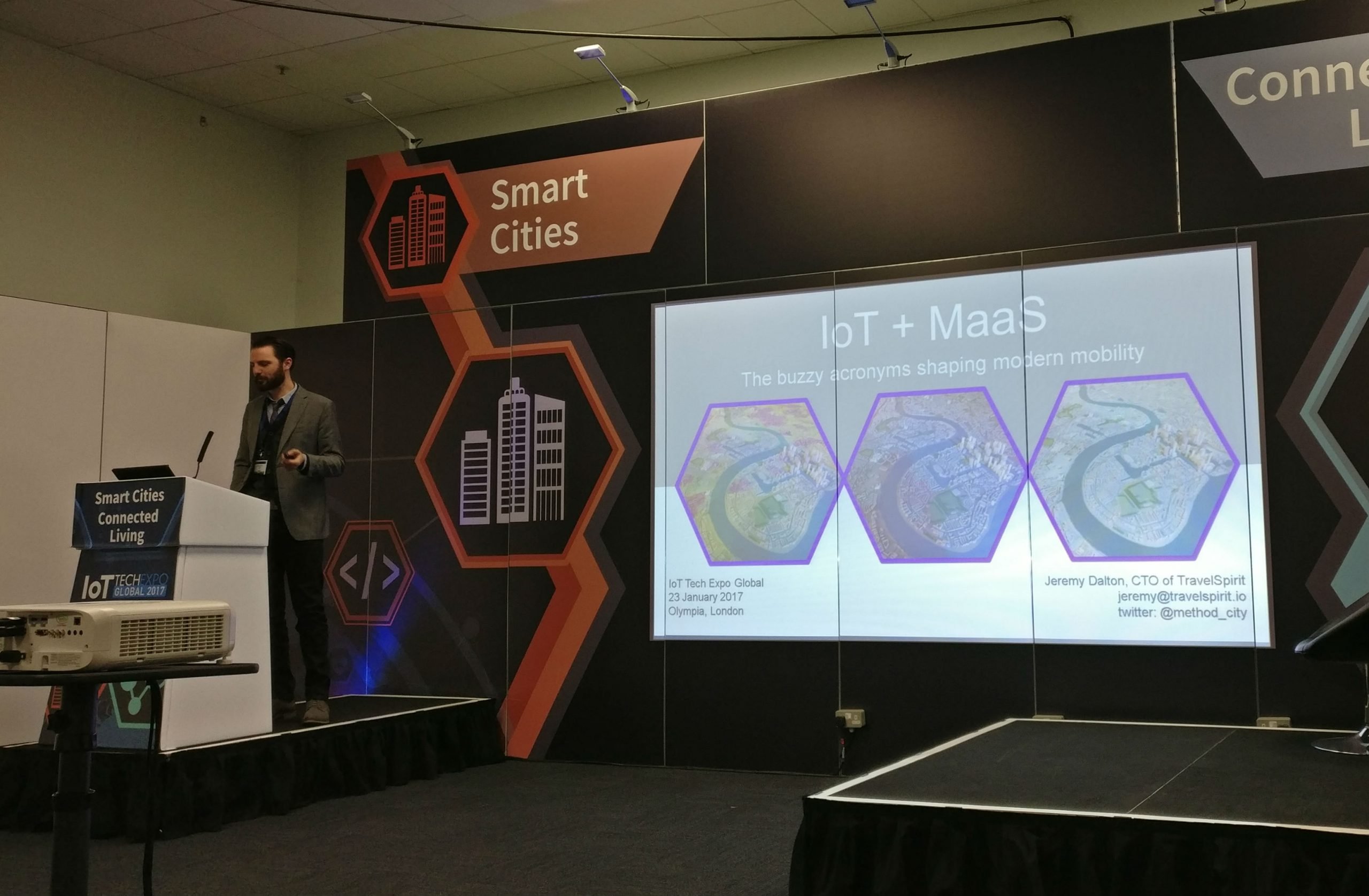 By Ryan Daws | 25th January 2017 | TechForge Media
Editor at TechForge Media. Often sighted at global tech conferences with a coffee in one hand and laptop in the other. If it's geeky, I'm probably into it.

Anyone who travels in a major city will be aware the increasing number of vehicles on the road is unsustainable from both a practical and environmental point of view. Jeremy Dalton, CTO of TravelSpirit, provided some insight on how we can build sustainable transport solutions for smart cities during a session at the IoT Tech Expo.

The length of the average commute is on the rise. While other factors also contribute, the increasing amounts of traffic in most cities have a large part to play. As seen in the research below, the daily commute is now up to 40 percent longer in some areas in 2013 than it was in 2005.

Using the example of Brighton, if we multiply the average increased daily commute time of 19 minutes by the average 235 working days of a full-time employee, we find each worker now spends an extra 74 hours per year just getting to and from work. That's over three days worth of lost time. Multiply that again by Brighton’s 87,000 full-time workers (according to 2015 census) and we reach a staggering 6,483,000 lost hours per year across Brighton’s population.

Aside from the impact which inefficient transportation is having on the amount of time we have for work and personal activities each year, emissions from burning fossil fuels are causing havoc with our environment. Despite where you stand on climate change, there’s no denying the effect pollutants are having on global health while the rate we’re depleting fuels is also unsustainable.

While it will take continued advancements in renewable energy for us to reduce our dependence on fossil fuels, smart cities provide an opportunity for us to build more sustainable and efficient transport systems which can get us to our destinations both quicker and healthier.

Enter yet another ‘as-a-Service’ known as MaaS, or Mobility-as-a-Service. At its core, it's the idea we’ll move from ownership of vehicles towards shared use and in doing so we open up a range of more efficient transportation methods.

Those who can afford the high-tech self-driving vehicles we’ll see emerge over the next decade can have them pick up others and earn money for the owner when they’re not in use. "Instead of our cars being idle 80% of the day, now they're going to be out there working for us," explains Dalton.

This will mean fewer cars on the road and less sat idle for most of the day when they could be assisting others with getting around. In fact, MIT put out a report (PDF) which concluded autonomous cars will reduce overall vehicle count by 80 percent. The caveat with their predictions is that it's based on vehicles being deployed in fleets as public transport to get people out from their private ownership model. "In the end what is exciting, I think, is you're going to have fewer cars on the road," said Carlos Ratti, director of the SENSEable City Lab run by MIT.

MaaS will also enable new models of transport monetisation; such as unlimited travel using a driverless service for a monthly fee. Beyond city-level, regional, or even nationwide transport, your subscription could even allow you to access transportation in other countries when you travel for work or leisure.

"A lot of people think smart mobility is just self-driving cars, generally it comes down to one of three things," says Dalton. "First is smart parking, this is a really big topic in a lot of cities. Fewer cars circling around looking for spaces means less congestion, and less congestion means better air quality."

Startups capitalising on smart parking include Parkanizer and Save-a-Space, along with EU-backed initiatives promoting developments such as frontierCities and FIWARE. The apps, currently in limited tests, enable drivers to see available parking spaces and book them ahead of time as well as report back automatically when they leave and their space is now vacant for others.

"Another one is signals. Whether that's V2I (Vehicle-to-Infrastructure) stuff where you're giving priority to cars coming along like autonomous cars, or electric vehicles, or whatever else you're trying to promote," continues Dalton.

This will help those night-time drives when you're sat at a traffic light with nothing else around just because it's on a set timer. Your vehicle will be able to communicate with the light to report you're waiting and if nothing else is waiting on the other side it could switch to green and safely let you continue your journey. For emergency vehicles, lights at other junctions on their route could switch red for other road users to let them cross quickly.

"And of course there's autonomous vehicles. The terms 'evolutionary' and 'revolutionary' apply particularly to self-driving vehicles," says Dalton. "Think about Tesla slowly rolling out autonomous car features versus Google's more revolutionary 'here it is, from scratch, no steering wheel…' approach."

Dalton points out the UK, in particular, is looking to lead in self-driving cars. The DfT (Department for Transport) is working hard to create an environment for autonomous vehicles to be developed with little hindrance. This involves looking at policy implications early on around things like insurance, and whether the same rules apply if the occupant is an adult, or a child being taken to school.

With the introduction of the likes of Uber and Lyft, these innovative services are providing a 'stepping stone' towards moving away from everyone owning a vehicle. Although not (yet) autonomous, many people now use Uber as their main transport, especially now the company has introduced cheaper fares by 'pooling' with other users. However, it's still going to be a big jump to persuade citizens to jump in a vehicle with no driver whatsoever.

What are your thoughts on the future of sustainable transport? Let us know in the comments.