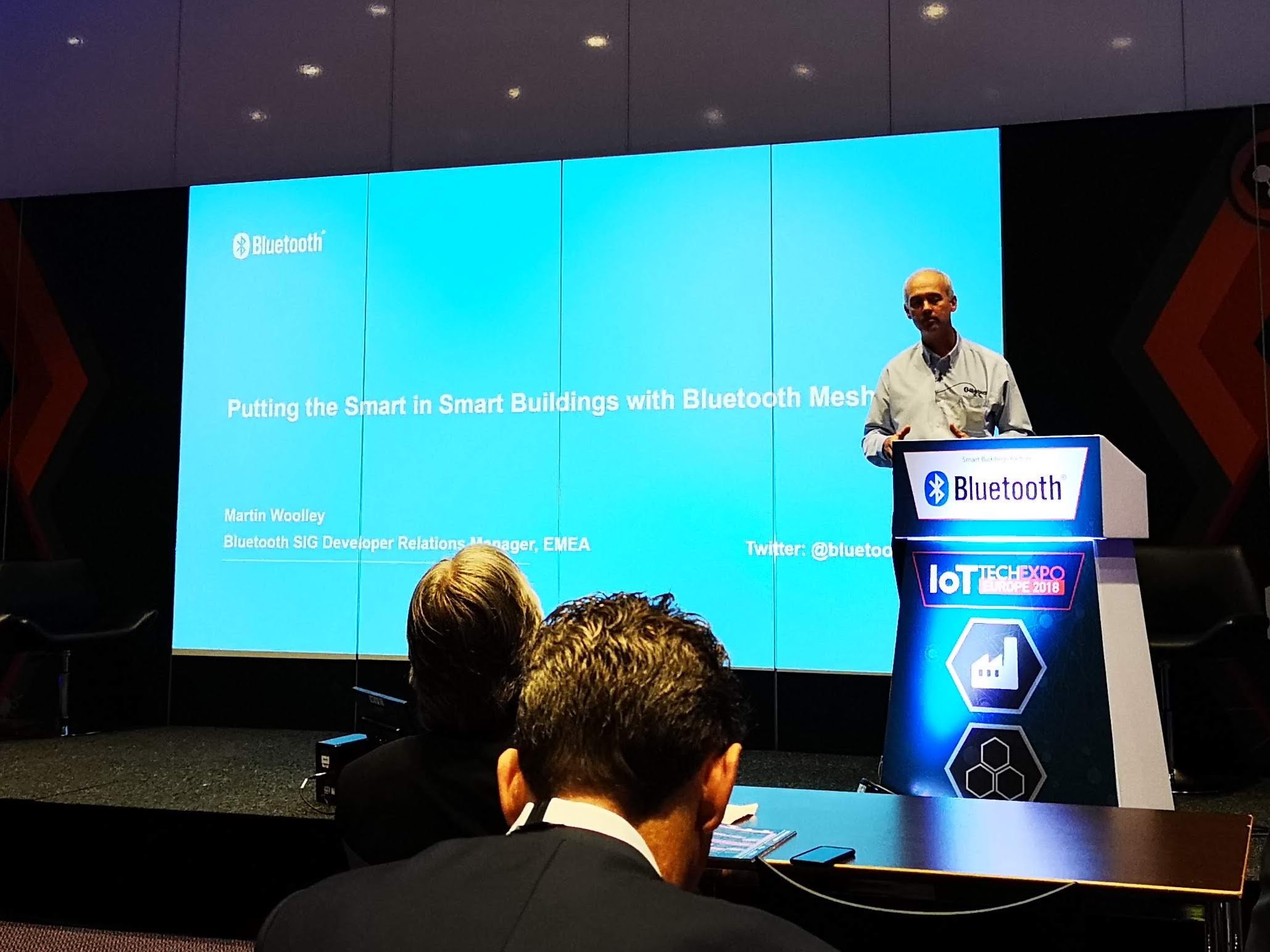 By Ryan Daws | 27th June 2018 | TechForge Media
Editor at TechForge Media. Often sighted at global tech conferences with a coffee in one hand and laptop in the other. If it's geeky, I'm probably into it.

IoT Tech Expo in Amsterdam is just kicking off and there’s already fighting words from low-power networks on why their technology is the best.

In a keynote titled ‘Putting the Smart in Smart Buildings with Bluetooth Mesh’, we heard from Bluetooth SIG Technical Program Manager Martin Woolley on what makes the technology a wise choice for smart building deployments.

“Last year, we introduced something called Bluetooth Mesh,” says Woolley. “That gave us the ability to have many-to-many communication paths between devices.”

“Many thousands of devices can form a network … it’s very much designed for things like smart buildings.”

The session began with the usual statistics, although thankfully less than a typical Apple keynote. One stat, in particular, stood out – on average, there are now 10 million Bluetooth devices shipped every day. That ubiquity is a major strength.

“Over 34,000 companies [Bluetooth membership figures] back the technology, they’ve essentially bet their business on it in some cases,” explains Woolley.

“We’ve seconded people from them to work on our projects in working groups, and they bring specialist knowledge in different areas.”

IoT is rarely discussed without some mention of scalability. Gartner predicts a typical family home will contain more than 500 smart devices by 2022. Larger buildings and factories will likely have even more.

Woolley believes it’s less about the smart home and more about smart commercial buildings; where self-optimisation means saving money and potentially gaining the edge over competitors.

“The time is right. You look around the world and there’s a compelling business case for the smart connected building,” comments Woolley. “Less so with the smart home, which seems to be mostly about convenience and novelty.”

Bluetooth Mesh supports up to 32,767 nodes per network and can send hundreds of multicast messages per second. Just one message is able to control many devices. First up is ‘multi-hop messaging’ where messages hop across the network to reach the far edges of a network. Bluetooth Mesh supports up to 127 hops which should be enough to cover entire campuses of buildings.

“There are several low-power mesh networking technologies,” says Woolley. “One of the things I think they all have in common is that devices can communicate with other devices even when they’re out of radio range of each other.”

“Bluetooth Mesh is not unique in that respect. The point-to-point range of Bluetooth low-energy though is quite high, much higher than many people realise, it’s hundreds of metres.”

To ensure reliability, Bluetooth Mesh also supports multi-path. If one path through the network is blocked, or a device goes offline, it doesn’t matter as copies of messages go across multiple paths to ensure it reaches its destination.

“Multi-path is something different that I believe only we do,” comments Woolley.

Another thing which affects the reliability of wireless signals is packet collisions where they’re essentially lost. Devices do not even have to send data at the same time for a collision to occur, they just have to overlap in time and on the same RF channel.

Wireless technologies generally either attempt to avoid collisions altogether or accommodate them. Bluetooth goes for the latter approach by waiting a random amount of time before retransmitting where a collision has occurred.

Quite possibly the other major talking point alongside IoT scalability is security. Bluetooth has a couple of key measures here.

Bluetooth products must support the same security features. That means, unlike what we’ve often seen with WiFi devices, one device cannot weaken the security of another and compromise the whole network.

“There’s a commissioning process where a new device is equipped with some security keys,” explains Woolley. “Once your device has this collection of security keys, all with different purposes – securing different layers of communication – it’s now a part of your network.”

“It’s a closed network, not an ad hoc network where random devices turn up and use the network and go away. It’s not for that, it’s a secure network.”

Another security measure is that only members of the same network can communicate. This further reduces the chance of a rogue device being able to connect.

Many IoT devices, especially sensors, require extremely low-power consumption. Bluetooth SIG has given a lot of thought into how to facilitate these devices. Part of their solution is to implement what it calls ‘friend nodes’. To be low-power, a node requires to use radio as little as possible. That’s fairly trivial for send messages as the device only needs to activate its radio when it has data to send. Receive messages are more difficult, as the device will need to check the mesh often to ensure there are no updates.

“The problem with low-power nodes – if they only send one byte of data every six months we don’t have an issue – but more commonly they also need to receive messages to change configuration thresholds, rotate security keys, and so on,” says Woolley.

“Potentially they need to be on a lot of the time just in case a message is sent to that device. All the time that radio is on, it’s consuming power.”

Today's presentation made clear the Bluetooth SIG is working tirelessly to address the industry’s most prominent concerns of scalability, reliability, and security.

For a smart building, Bluetooth Mesh could be a wise choice.

What are your thoughts about the use of Bluetooth Mesh for smart buildings? Let us know in the comments.