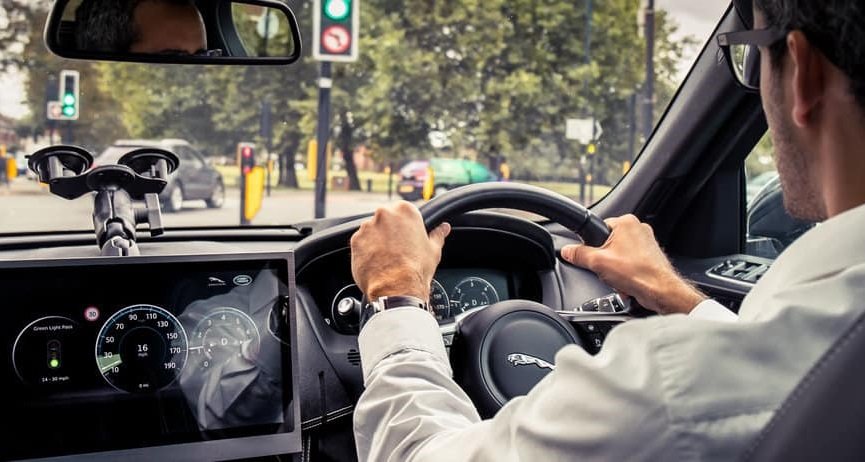 By Ryan Daws | 16th November 2018 | TechForge Media
Categories: Connected Vehicles, Smart Cities,
Ryan is an editor at TechForge Media with over a decade of experience covering the latest technology and interviewing leading industry figures. He can often be sighted at tech conferences with a strong coffee in one hand and a laptop in the other. If it's geeky, he’s probably into it. Find him on Twitter: @Gadget_Ry

A demonstration by Jaguar Land Rover shows how Vehicle-to-Infrastructure (V2X) technology could prevent cars from getting stuck at lights.

Since the world’s first traffic lights were installed outside the Houses of Parliament in London 150 years ago, very little has changed. The Green Light Optimal Speed Advisory (GLOSA) system could be the modernisation drivers have been waiting for.

Getting stuck at lights is no fun. Most of us have been there, it’s 2am on the way home and you’ve been halted by a red light with nothing else around.

Furthermore, it’s bad for the environment and our wallets. Many modern cars at least now cut off their engines when stopped, but pulling away from a halt consumes far more fuel than maintaining a constant pace.

Jaguar Land Rover’s technology creates a communication between the vehicle and roadside infrastructure such as traffic lights.

This communication enables two possibilities: a) the light could be turned green ahead of time if the route is clear, or b) the light could let the car know when it’s going to switch green so the vehicle could adjust its speed accordingly.

GLOSA is currently being trialled as part of a £20 million collaborative research project called UK Autodrive. The vehicle being used is a Jaguar F-PACE which already boasts Advanced Driver Assistance (ADAS) features.

“This cutting-edge technology will radically reduce the time we waste at traffic lights. It has the potential to revolutionise driving by creating safe, free-flowing cities that take the stress out of commuting.

Our research is motivated by the chance to make future journeys as comfortable and stress-free as possible for all our customers.”

GLOSA is being tested in addition to other technologies designed to improve safety and efficiency at junctions.

For example, Intersection Collision Warning (ICW) informs drivers if other cars are approaching from another road and can suggest the order in which cars should proceed at a junction. While the technology is ready-to-go in vehicles, it will take some time for roadside infrastructure to be updated. The system will require 5G networks for reliable connectivity which themselves are some distance from widespread deployment.