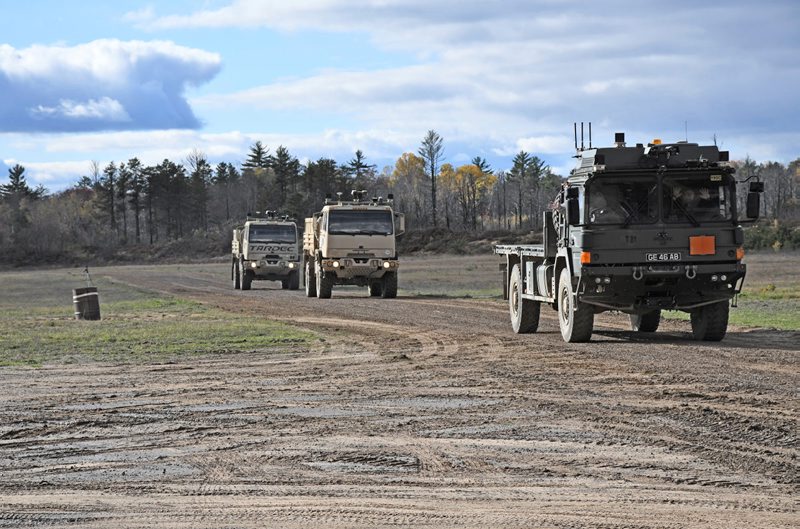 By Ryan Daws | 20th September 2019 | TechForge Media
Categories: Connected Vehicles, IoT,
Ryan is an editor at TechForge Media with over a decade of experience covering the latest technology and interviewing leading industry figures. He can often be sighted at tech conferences with a strong coffee in one hand and a laptop in the other. If it's geeky, he’s probably into it. Find him on Twitter: @Gadget_Ry

Advanced units from the UK and US militaries have teamed up as part of a joint experiment using British-designed autonomous systems.

“CAAR is a great example of successful US/UK Science and Technology and warfighter collaboration. Over three years of trials and experimentation CAAR has rapidly-developed the army’s thinking around the use of autonomous capability within an information-led, integrated and technology-enabled supply chain.

Exploitation into the army’s core Combat Service Support modernisation and transformation programmes is now a priority and we’ll seek opportunities for collaborative capability development where it makes sense to do so.”

During the experiment, a semi-autonomous logistic convoy was tested along with aerial autonomous resupply systems. The lead vehicle was operated in various modes including controlled semi-autonomously through the use of designated waypoints. Both UK and US tactical resupply vehicles were used in the convoy.

Major Andrew Scruggs from the US Army said:

“The collaboration is vital and has been one of truly mutual support and burden-sharing. Both nations have put their expertise and resources together to learn and create new ideas and approaches for Army logistics operations of the future.

We have been able to look at the challenges of working with how you take different systems from different nations and different companies and get them all to talk together.”

The autonomous vehicles are being researched to assist with delivering frontline supplies which are likely to be targeted by an adversary. Autonomous deliveries will help to prevent deaths or injuries to troops making deliveries back and forth in combat zones while freeing up personnel for other mission-critical activities.

“This has been a journey in understanding, not only how to integrate technically the different capabilities, but importantly to help the British and US Armies understand and develop the potential concepts of use, tactics and procedures together in the representative battlefield environments.

We have gained hugely valuable insights into the reliability and maturity of ‘state of the art’ technology and how to operate these systems as a UK/US coalition. This is about two major Western partners working together to make future battlefield operations less risky, more effective and efficient.”

The ‘special relationship’ between the UK and the US remains as close and strategically-important as ever, especially given the countries’ breakdown in relations with the EU over areas such as trade and NATO commitments. This rift has only increased amid growing tensions with Iran.

While the UK supported US sanctions against Iran for its ongoing hostile activities, the EU did not and even established a ‘special trade vehicle’ to avoid them. When a British ship was illegally seized in the Hormuz strait by Iran, the US and UK led efforts to protect shipping routes in the area but the EU did not offer its support.

The US has further increased sanctions on Iran after Saudi Arabia accused the country of carrying out a drone attack on its oil facilities which took out five percent of the world’s supply. The New York Times reports that Ellie Geranmayeh, a scholar of Iran at the European Council on Foreign Relations, said most European powers blame Trump for creating the environment that led to the attacks.

Speaking on BBC Radio 4's Today Programme, former UK defence secretary Dr Liam Fox said he believed it was becoming increasingly clear that Iran is to blame for the attacks. He warned: "I think it's difficult to rule out military action."